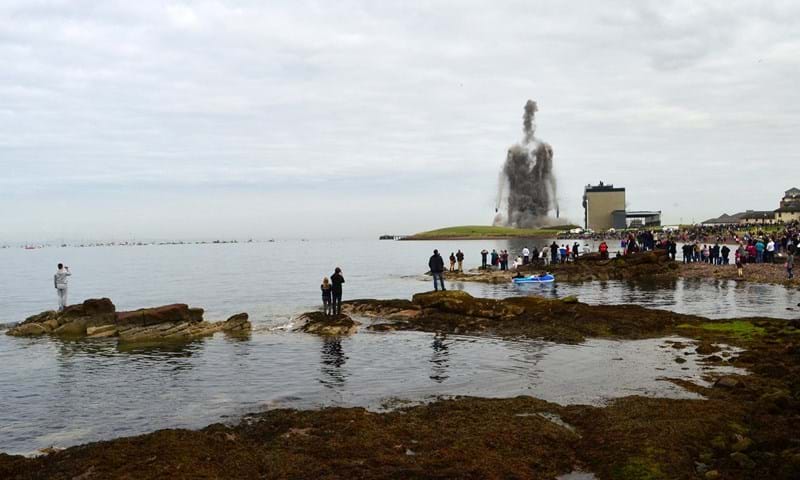 Members of the public across Scotland are toasting success today (26th January) as the winners of the Visions of Climate Heritage Competition were announced.

Capturing scenes of Scotland’s changing landscapes and the impacts of pollution and extreme weather, the competition winners across the categories of Best Artwork, Best Photograph, Best Mobile Photograph and the Young Creative Awards, were chosen by the panel of judges, including internationally renowned climate scientist Katharine Hayhoe, for their contribution to Scotland’s climate story.

Best Artwork was awarded to Gemma Lubbock for her evocative painting, titled ‘This is an Emergency’, of a local building in Hawick, Scottish Borders which suffered major damage during Storm Ciara. The town has since received generous investment for flood defences, to protect against the impacts of climate change.

“I hoped to capture the sheer power in the raging water torrents” Gemma said, “Climate change is having a devastating effect on real people, right now, even here in Scotland. I hope my painting conveys what we’re up against, and how we only solve this by working with nature to make positive change.”

First Prize in the Best Photograph category went to Craig Buchan for his striking photograph ‘Cockenzie No More’, which members of the judging panel “couldn’t stop thinking about”.

“I am delighted to win!” said Craig. “This image is from a personal project called ‘Transition’, a study of the shift from fossil fuel-based industries to renewable energies in Scotland. The photograph itself is of the moment the two massive chimneys were demolished at Cockenzie power station.”

Second Prize for Best Photograph was awarded to Iain McLachlan for ‘A Tiny Planet’, which was praised by the judges for its striking composition. ‘Oh for a drop of rain’, by photographer JC, took Third Prize in the Best Photograph Category, inspired simply by the low water levels from a prolonged dry spell which demonstrate the fragility of our ecosystems.

The award for Best Mobile Photograph went to Carson Haggart, for his poignant photograph ‘A shop too far’.

Visions of Climate Heritage, which launched to coincide with COP26, has been developed by HES in partnership with the Heritage Trust Network and the Scottish Council on Archives in response to the climate emergency.

The panel of judges who chose the winning entries include Katharine Hayhoe, the internationally renowned climate scientist and one of TIME’s 100 Most Influential People; Phil Astley, the City Archivist for Aberdeen City and Aberdeenshire Archives; Beverley Gormley, Programme Manager for the Heritage Trust Network; Dr David Mitchell, Director of Conservation for HES; and Robyn, a representative from the HistoricScot Youth Forum.

As part of the competition HES has created a crowdsourced online exhibition of photography and artwork, to help tell Scotland’s climate – past, present and future – with the aim to harness the power of Scotland’s historic environment and cultural heritage to inspire climate action. The exhibition is split into the competition’s three themes: ‘The past was a different Place’; ‘This is an Emergency’; and ‘A Greener Future’, and can all be viewed on the HES website.

Alison Turnbull, Director of Development and Partnership at HES, said

“I would like to extend my congratulations to the winners of Visions of Climate Heritage, our first-ever crowdsourcing competition. We had a myriad of fantastic submissions, and all the winning entries help to tell Scotland’s climate story in their own unique way. I was particularly struck by the interesting different interpretations of the brief and the creativity on display from everyone who took part in the competition.

“Our Visions of Climate Heritage exhibition clearly demonstrates the power that our history and heritage have to unlock creativity and encourage us to all think about climate change issues in a different way. We hope that the images that form the exhibition, which are all on display on the HES website, along with the winning entries, will become an important resource for telling our continuing climate story and help to inspire the positive and sustainable changes required on our journey to net-zero.”