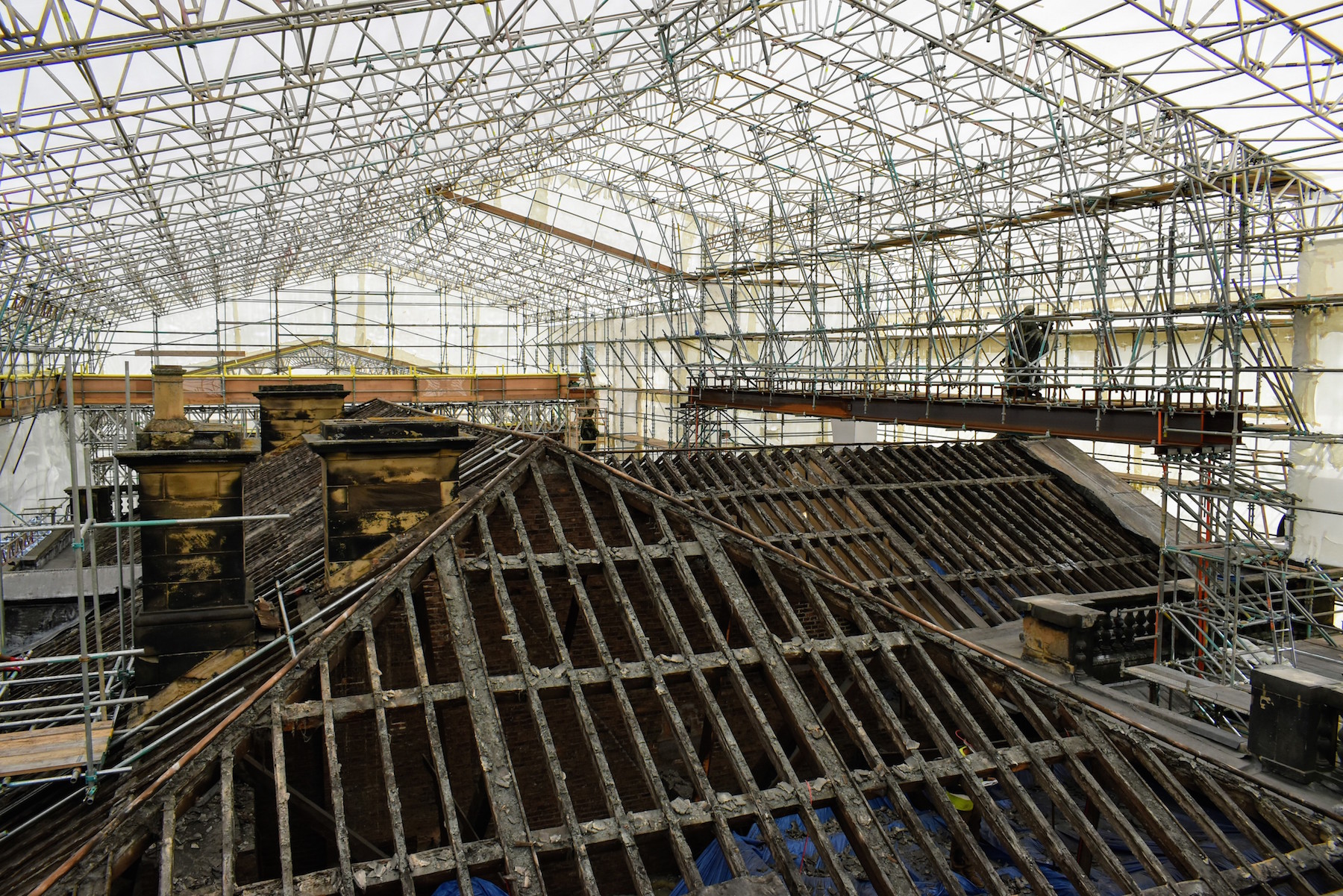 Another rainy night in Rotherham, another 180 buckets overflowing with rainwater in the steadily decaying 18th century rooms at Wentworth Woodhouse.

When the Preservation Trust took over the Grade I listed stately home in March 2017 with just six staff, emptying the buckets and mopping up was one of many backbreaking and crucial tasks.

But the buckets are now redundant and the Trust is celebrating a major milestone.

After almost two years of specialist repairs to the roof over the State Rooms, costing £5.5million, Phase 2 of the repair programme is now complete – and the majority of the Palladian-style East Front of the mansion is now water-tight.

Rainwater no longer pours in through holes in historic roofs. Ancient, overflowing guttering and drainpipes have been repaired or replaced, stone features created by artisan masons almost 250 years ago have been painstakingly restored.

Emergency roof repairs have also made endangered sections of the historic Stables and Riding School safe.

The achievements and challenges of this colossal project, which was carried out on-budget, and remained on-schedule during the pandemic, were highlighted at a celebratory event on Wednesday October 6.

Gathered in the mansion’s Long Gallery, where rows of rain buckets stood before its own roof repairs were carried out, trustees, supporters and representatives from the organisations who had played their part heard how many years of neglect have been repaired to the highest of conservation standards and the workload involved.

Phase 2 repairs began in 2019. Urgent works across the site had been carried out from August 2017 to March 2019 , and Phase 1 repairs at the Riding School and the mansion’s Bedlam Wing and Chapel ran from March 2018 to January 2020.

The three repair projects were funded by a £7.6 million Treasury grant awarded to the Trust by Chancellor Philip Hammond in his Autumn 2016 Statement.

Before Phase 2 work could start, scaffold on an epic scale had to be designed. Once erected it encased the mansion in a shell comprised of 700 tonnes of scaffold poles towering 30 metres tall.

The Trust’s CEO Sarah McLeod said: “The project has been one of the most exciting and challenging heritage projects of a generation. Every single person involved has played a vital role – from the contractors through to our volunteers who led tours on our rooftops, enabling the public to watch work progressing.

She added: “We’ve had many challenges to go through. The scale of Wentworth Woodhouse and its sad state brought particular problems, which expertise and skill overcame.

“Then came the global pandemic. We overcame that too; the site was closed for just five weeks and supplies of materials were maintained.

“The project has been a triumph. The building is now protected for future generations to enjoy and the Preservation Trust can move on to other vital repair and restoration tasks.”

In January 2021, specialist conservators were also able to start essential repairs to the roof of the North Pavilion, which sits at one end of the Palladian East Front, and the North and South Quadrants.

These repairs were funded by a £811,000 lifeline grant issued during the pandemic by the government’s Culture Recovery Fund. The grant was administered by Historic England and matched with money remaining in the Phase 2 budget and grants from The Swire Charitable Trust, The Goldsmiths’ Company Charity and private donations resulting from a successful public appeal.

The six-month North Pavilion project saw the roof and its stonework, cornices and guttering repaired and key features on the tower restored.

A centuries-old 400kg weather vane was repaired and re-gilded in gold leaf.

Giles Proctor, conservation architect for Historic England, the organisation whose expertise has guided the project throughout, commented: “The work to date has been an enormous achievement, protecting the priceless interiors of the East Front and the Long Gallery from further deterioration and rescuing the Bedlam Wing from imminent ruin.  “ About 55 per cent of the mansion’s roofs have been repaired, so there remains much to do, but in an astonishingly short time the Trust has secured the future of this magnificent building.”

Image: Repairs were carried out on roofs the size of three football pitches