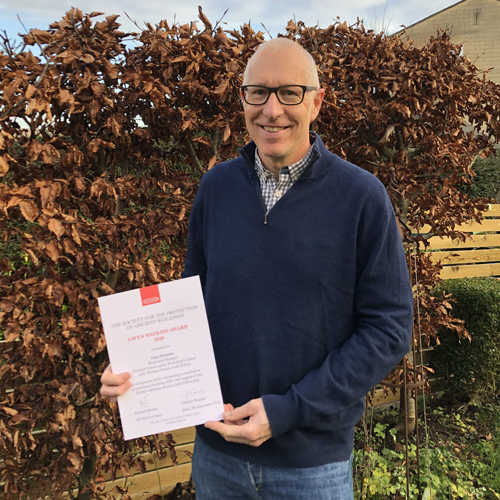 Cliveden Conservation’s long-standing team member and manager of the Bath Workshop, Tom Flemons has been presented with the SPAB Gwyn Watkins Award 2020.

Stonemason Tom received the 2020 award for his outstanding personal contribution both to traditional building skills and support of the SPAB Fellowship. This award recognises those who have demonstrated excellence in their own work, actively supported and encouraged other craftspeople, and made a continuing contribution to building conservation, SPAB and the Fellowship.

Tom Flemons is a long-term member of SPAB’s Education and Training Committee, Scholars and Fellows Liaison Group and Fellowship recruitment panel. Tom is himself a past Fellow, and now a host and mentor to other craftspeople, as well as one of the group of SPAB members helping to guide the Old House Project.

Chairman of the William Morris Craft Fellowship Trust, SPAB Fellow and committee member Alexander Gibbons, of Stick in the Mud Conservation, praised Tom for his achievements and outstanding contribution to craft training.

“It would be hard to think of someone who has contributed more than Tom Flemons. He has been part of SPAB’s Education and Training Committee for nearly a quarter of a century, was on the founding committee of the William Morris Craft Fellowship Trust and hosts SPAB Fellows annually.

He is a leading voice when it comes to inspiring and encouraging others in their craft-training journey. Tom’s calm and considered integrity makes him not only a respected stone conservator and workshop manager for Cliveden Conservation but also a great mentor to so many aspiring craftspeople.”

The SPAB Gwyn Watkins Award was named in honour of one of the first Fellows, stonemason Gwyn Watkins, who was a superb craftsman and an inspiring host and mentor to those who came after him. The award was set up to mark the 30th anniversary of its William Morris Craft Fellowship training programme in 2017.

“I was very proud to be awarded my Fellowship in 1992, learning an enormous amount and gaining from mixing with – and having the opportunity to experience – a wide range of trades and crafts. I have enjoyed and learnt such a great deal over the years from all those with whom I have come into contact on the various SPAB committees and panel. It is an enormous honour to have been awarded the Gwyn Watkins award and lovely to be linked with Gwyn who himself was such a gifted mason and carver;” enthused Tom Flemons, Bath Workshop Manager, Cliveden Conservation.