A community aims to create something very special and they need your help! 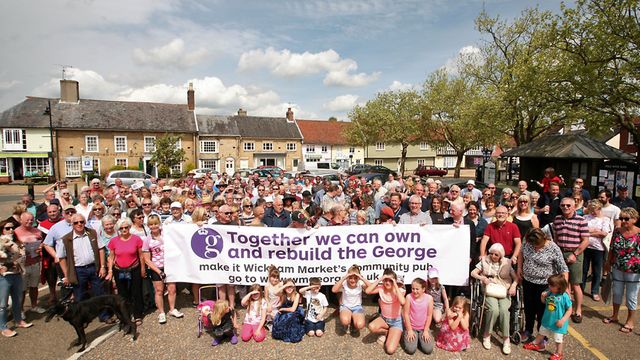 Following a National Lottery Heritage Fund award of £988,200 The George Community Pub, Wickham Market, Suffolk has launched a second share issue to raise the final funds necessary and begin restoration of the five hundred year-old Grade II-listed pub that was severely damaged by fire in 2013.

As the last remaining pub in Wickham Market, the plans for restoration of The George pub will create a much-needed social hub and preserve a significant heritage asset. After five years of work by volunteers, a second share issue with a target of £340,000 will secure The George’s future. This sounds a large sum but more than half of this figure has already been pledged in the last year by supporters keen to have a pub once more in the village owned by the community. Those who made a pledge (of anywhere between £50 and several thousand pounds) will now be asked to convert those promises into shares. The Society is also encouraging those who missed the pledge campaign, or were previously hesitant, to buy shares now. It is everyone’s chance get involved in this exciting, and long hoped for, restoration.

As an incentive for community ownership, Wickham Market residents investing in shares will attract “match-funding” under the Community Share Booster Programme to a maximum of £50,000. The funding for this has been provided by The Architectural Heritage Fund, supporters of the George project since its earliest days, through the Programme. The Programme supports community businesses in launching community share offers that can demonstrate high levels of community impact and engagement. The Heritage Fund supports those launches which, additionally, utilise heritage assets, such as The George, to transform high streets across the country. This support will allow The George Community Pub (a Community Benefit Society) to celebrate the importance of local investor’s contributions, who will see every pound they invest doubled by the Booster Programme.

The Heritage Fund, again through the Share Booster Programme, have also funded The Society to obtain the nationally-recognised Community Share Standard Mark for its offer documents, and the cost of the launch itself.

The Society has, also, recently received advanced assurance from HM Revenue & Customs under the Social Investment Tax Relief Scheme, that the purchase of shares in The George Community Pub will attract 30% tax relief for investors who are UK tax payers. For example, a £1000 investment will reduce an income tax bill by £300!

Alongside grant awards of over £1m, there are over 320 existing shareholders who have already contributed to the aim of restoring this important historical building as a pub, restaurant and vibrant community hub. There will be a bar, restaurant, professional kitchen and wood-fired pizza oven on the ground floor and, on the first floor, a fully accessible space offering workshops, classes, lectures and social activities. The George Committee are also working with a number of community groups and other organisations to ensure those living with dementia or loneliness have a safe place in which to meet and socialise in a post-Covid world. Through their commitment, Society members, as shareholders, will have a stake and a say in the future of The George.

A spokesperson from the George team said;

“Landmark buildings on a High Street are often distinctive, engrained in the local community and can provide a huge source of heritage and social history. The George Pub is one such building.

To save, restore and bring The George back to its original purpose as a public house and social hub from a ruin under threat of demolition, will be an astounding achievement for Wickham Market and the surrounding area. Amongst others, we thank National Lottery Players everywhere for their help in making projects like this happen.

Alongside the positive historical and economic impact, community businesses deliver a range of important social outcomes. These include employment, reducing social isolation, improving health and wellbeing, encouraging community cohesion and the fostering of local pride. This building has proven to be too important to let go” 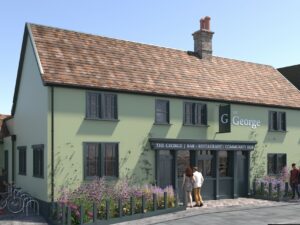 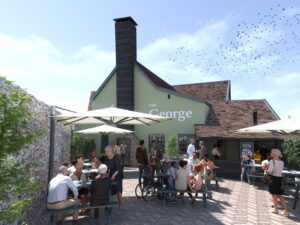