Rare Oldham mural under threat – SAVE calls for listing 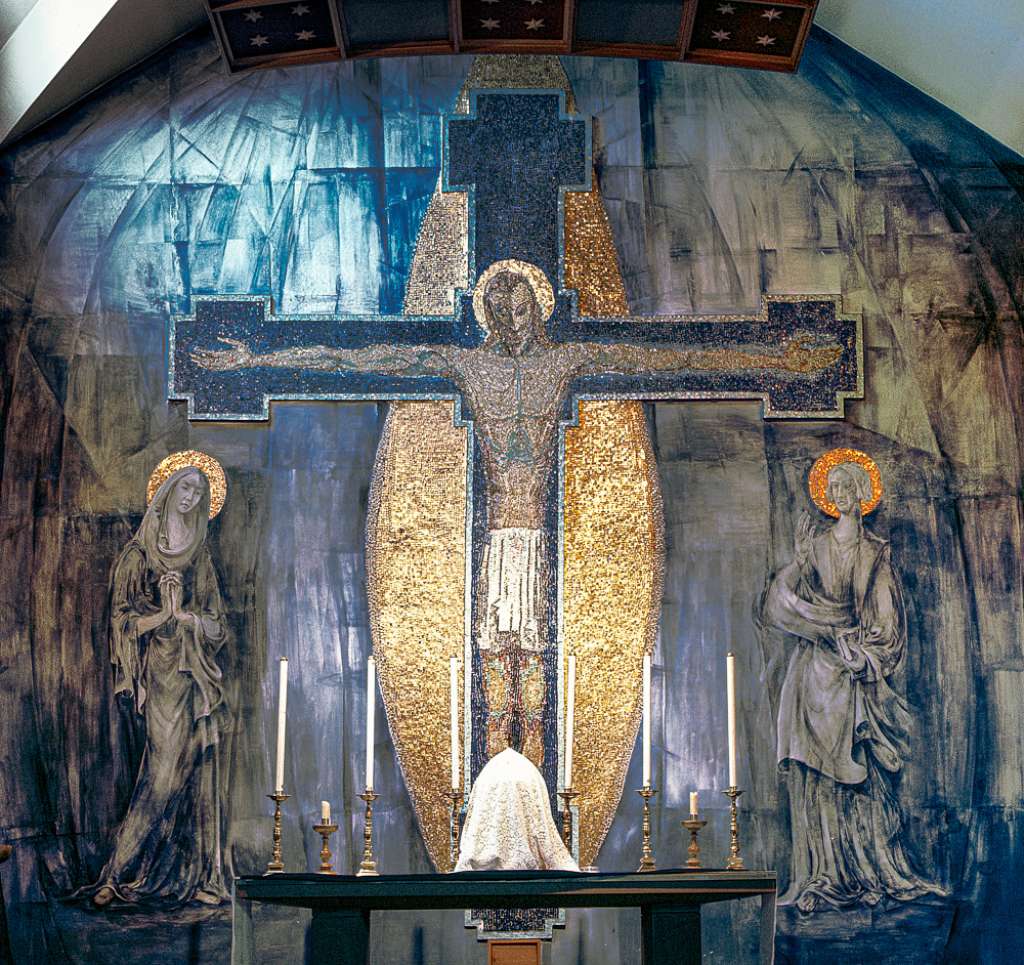 SAVE Britain’s Heritage is backing urgent calls to rescue a nationally significant 1950s mural at risk from demolition.

We have written to Historic England urging them to recommend the listing of the mural by Hungarian artist George Mayer-Marton. ‘The Crucifixion’ is an unusual combination of mosaic and painted fresco completed in 1955 in Oldham’s Church of the Holy Rosary in Lancashire.

The church has been redundant for over three years and the mural is increasingly at risk of vandalism, theft, and the threat of redevelopment.

The large (estimated at 7.5m) mosaic depicts the figure of Christ in golds and tans against a dark blue cross and gold mandorla. It was commissioned in 1955 following the Festival of Britain when public art came to be seen as a symbol of civic renewal and social progress.

Only one of only two ecclesiastical murals by Mayer-Marton that survive in situ, it is the only one that incorporates both fresco and mosaic.

Henrietta Billings, director of SAVE Britain’s Heritage said: “This is an incredibly rare, well executed and important mural for Oldham and for England by a leading 20th century artist and lecturer – it needs protection and national recognition through listing and SAVE is ready to help find a secure future for it.”

The mosaic was originally surrounded by wall paintings (estimated 3m high) depicting the figures of Mary and John the Apostle against a background of various shades of blue. Historical photographs show that the wall painting extended over the entire wall, but in the 1980s the fresco element was overpainted.

New evidence has concluded that the fresco remains intact under the paint and that it is possible to restore the mural to its original condition.

The significance of the mural has been highlighted by a number of national experts including the Twentieth Century Society, the Ceramic and Architectural Tiles Association as well as several leading academics and architectural historians.

Mayer-Marton (born Hungary 1897, died Liverpool 1960) was a leading figure in the Viennese art world in the 1920s and 1930s. He and his wife escaped to Britain in 1938, where he began working as a lecturer for CEMA, the predecessor of Arts Council. In 1952 he was appointed as a lecturer at the Liverpool College of Art. There he established the Department of Mural Art. The course in this technique which he instigated at the College was the first of its kind in the UK.

During his time at the college Mayer-Marton completed more than 200 oil paintings and he was commissioned by the Roman Catholic Church to carry out works at a number of churches in Lancashire and Cheshire, completing numerous frescoes and mosaics, one of which, the Pentecost, now resides in the Metropolitan Church of Christ the King in Liverpool.

The Byzantine mosaic method Mayer-Marton employed is believed to be its first use in this country. This mural is one of only two ecclesiastical murals by Mayer-Marton that survive in situ and the only one that incorporates both fresco and mosaic.